What will happen when the market crashes??

Hello everyone. And welcome to a new edition of Merrill's Monday morning market madness, uh, where we take a look at what's going on in the Phoenix Metro residential housing market, uh, before I get into the numbers and what we're going to talk about today, I wanted to ask you real quick. Um, I am always looking for new ideas of stuff to talk about in this show.

Right now, there are 4,865 active listings, uh, 12,413 pending listings, 7,111 homes that have closed in the past 30 days, giving us a month's supply of inventory of 0.68. Um, Honestly, the only reason that the month's supply of inventory is that high is because January didn't see a ton of closings and we're starting to see that the total number of pending listings is climbing quite dramatically, which means that in the next 30 to 60 days, the number of homes that will have closed in a 30 day period will be getting much higher.

I expect it to go above 8,000. So. Pretty soon. We're going to have a month's supply of inventory below 0.5. Um, it is truly dire out there. I mean, if you're a buyer, you know, it is so tough right now, multiple offers on everything. Um, this feels like everything is going above the list price. We're seeing very much.

Uh, fast-climbing prices at the moment. Often it's not uncommon at all right now to see buyers who are having to waive appraisal, contingencies, or inspections, or, you know, um, Shortening inspections, all sorts of things that buy higher earnest money non-refundable deposits. There are all sorts of things going on right now that we haven't seen in the past, that buyers are doing to try to get homes under contract.

And yes, there's a lot of new construction. I'm sure you drive around and you see homes being built all over the place, but almost all the builders. Are on massive waiting lists and they're not even beginning to, you know, they're, you know, if you want to build a home from dirt, most of them are 10 months or more out.

So it doesn't work for a lot of buyers who need to buy a home now. And even for the people who do work for, um, Again, they're there, they're on a waiting list. Some of them are doing drawings, lotteries, uh, bidding for the lot. Um, so, so getting a new build isn't any easier either. The whole entire market is just, uh, intense right now.

And so because of that, because of these quickly, you know, fast-growing prices, the thing that we're hearing and seeing a lot of is people who believe that the market is going to crash, right? No way we can go up that fast without being in a bubble. Um, and that's probably the number one, objection that we're getting from clients right now.

And I want to address that I've actually addressed this a lot more in-depth in previous episodes. The honest truth is that I really truly do not believe that we're in a bubble or heading for a crash. I think everyone assumes because in 2005, in 2006, when we saw dramatic house price increases, and then it crashed there's almost this assumption that.

Uh, well, uh, you know, if, if it's going to go up crazy like that, then it's definitely gonna come crashing down crazy like that again. But you have to remember that the, you know, economic recession in 2008, through 2010, that was caused by a housing crisis. And even if you look at previous recessions in our economy, housing prices were not negatively affected in most of the previous recessions.

So that one was a dramatic example, probably once in a lifetime. I doubt that we will see a massive. You get dropped like that again. Um, but there's a couple of things to consider right now. Tons of buyers are buying with cash, huge or huge down payments. Um, and there are no bad loans going on right now. And there are virtually no vacant properties.

So something that was happening in 2005 and 2006 was a lot of what we, what we can call speculative. Buying buyers would buy a home, with no intention ever whatsoever of living in it. Um, But just with how fast, the price they treated it like a stock, like an investment. I'm going to buy this house. I'll wait six months.

I'll put, make the payments and I'll sell it and I'll make a hundred thousand dollars. Right? I have not seen that once. Um, yes, home prices are rising really quickly. Um, but there are no one's really doing that speculative buying right now. There's, there's such a desperate need for homes that are needing to be lived in the rental demand is insane right now. Rental prices are skyrocketing as well, which when rental prices skyrocket, that puts even more demand on the purchase market because people want to get out of their rentals and buy. Cause they're tired of the rent going up by a hundred dollars a month, every single year.

Everyone's getting a standard 30 year fixed rate mortgage and, um, You know, we expect that that will continue. Um, but here's the thing, like the only thing that I could see possibly causing a slow down in our market, I don't even think it would cause the house prices to drop, but maybe I'm wrong. You probably think I'm biased because I'm a realtor.

Right. So let's look at it from the other perspective, let's say that I'm wrong about all of this stuff and that the market. Is going to crash. It still doesn't do you any good to wait? Right. And, and here's why, so everyone, you know, I talk to people all the time who think, well, you know what, I'm going to wait for the market to get less competitive.

I'm going to wait for prices to drop before buying. First of all, you could be wrong about that. You could be waiting a very, very long time. In fact, I believe that you're wrong on that. And you might be kicking yourself, uh, you know, uh, five years from now because prices might not drop at all. But if they do.

Okay, right now you have an opportunity to get a loan. Let's just call it roughly two and a half percent. It can vary greatly depending on, you know, lots of factors. I'm not getting into that right now, but let's just say that you financed $400,000 on a home. Your principal and interest payment right now at two and a half percent on that $400,000 would be $1,580 and 48 cents.

And, you know, after the, you know, from. Before 2010, you really couldn't even get a rate in the force. So, so let's just, you know, but let's just assume rates are four and a half percent. You would have to find you the most, you could finance to have a similar payment would be 310,000. So you would need the exact same house to drop by almost a hundred thousand dollars.

If you finance 310,004 and a half percent, your principal and interest payment would be 1,500. $70 and 72 cents. So if you're banking on the market to crash, you better be banking on it to crash by, uh, at least 30% or more. Otherwise, it's really not worth it to wait because the prices are going to, um, uh, you know, because the, your monthly payment will be more, but let's say there is a market correction and home values dropped by an average of $20,000.

Again, I don't see that happening, but if it did it wouldn't, do you any good? Because the monthly payment on that new higher interest rates would actually be higher. So the opportunity to borrow money at two and a half percent, I mean, inflation will probably be more than that. So it's, it's just an incredible opportunity to get a super low payment.

The homes are actually really despite how much home prices have gone up. The affordability index right now is quite good because of how awesome these interest rates are. So again, I just want to reiterate, I'm an advocate. I do not believe values are going to drop, but if I was wrong, It still doesn't do you any good?

Like I said because the monthly payment would be higher. And so I think that everyone who's kind of got this thought that they're waiting for the market to crash might want to look at the math on that. Cause I just, I don't see it. I don't think it makes any sense. And I think you need to get into a house now.

So anyway, I hope you found this hopefully a little helpful and entertaining, and uh, uh, again, I look forward to hearing some of your ideas of what you guys would like me to talk about in the future. Thanks so much and have a great day. 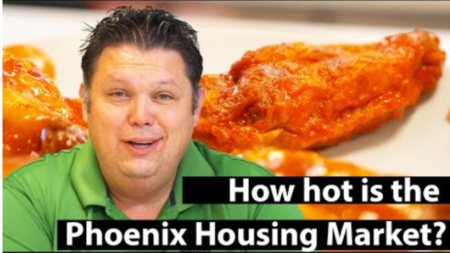 What does a chicken wing have to do with the PHX Housing Market?

A Chicken Walks into the Phoenix Housing Market... And is instantly turned into a hot wing. We've been trying to tell you ...

How Many Homes are REALLY Available??

Hello, everybody, and welcome to a new episode of Merrills Monday Morning Market Madness coming at you to talk to you about ...